Who was Florence Sabin? 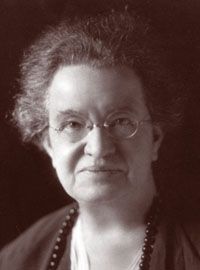 Florence R. Sabin 1889 was one of the great medical minds of the twentieth century. She devoted her life to furthering scientific knowledge and improving health conditions, particularly in Colorado. Born of humble beginnings November 9, 1871, in a frame house in Central City, Colorado, Florence and her sister Mary had a difficult childhood, filled with tragedy and suffering. The sisters lost two brothers to illness, and their mother Rena died when Florence was just seven years old. Florence’s father George was a mining engineer, who found little time to care for his two young daughters. As a result, after their mother’s death, Florence and Mary went to live at a home for girls called Wolfe Hall. After a few years, the two girls moved to Chicago to live with their uncle Albert.


Uncle Albert was a tremendous influence on Florence, and from her relationship with him, she developed a love of nature and a keen interest in books and music. The Sabin girls soon moved with their uncle to an old family farm in Vermont.

Florence became very interested in the life story of Levi Sabin, an ancestor who had graduated from medical school in 1798. Florence’s father had always wanted to be a doctor, but the obligations of mining overwhelmed him, and his thoughts of a medical career slowly disappeared. But Florence began to secretly harbor her father’s dream. In 1885 Florence enrolled at Vermont Academy, where her scientific interests were finally allowed to develop.

Florence was not a social butterfly, but she earned the respect of her classmates and her teachers through her extraordinary intellect. While at Vermont Academy, Florence became fascinated by all branches of science, earning superior grades in zoology, biology, chemistry, and geology. After graduating from Smith College, Florence was heartbroken to find that none of the top-rated medical schools would consider her because she was a woman. As a result, Florence returned to her home state of Colorado to teach school along with her sister Mary.

A few years after her return, Florence learned of a medical school in Baltimore, Johns Hopkins, which had received a financial incentive to admit women. Florence quickly rekindled her dreams, enrolling at Johns Hopkins the following year. She performed brilliantly at medical school, excelling in courses in anatomy, biochemistry, physiology, pharmacology, and bacteriology, and gaining an appointment as a laboratory researcher. Florence wrote many important papers at Johns Hopkins and helped prepare several books. She decided to enter the research and laboratory aspects of medicine. After graduating from John Hopkins in 1900, she began a scientific career studying the lymphatic system, blood cells and vessels; it would earn her national respect in the medical community.

One of her many accomplishments was the development of a design model of a baby’s brain, which was used for years in medical schools. Her principal area of research became human anatomy, and in 1901 she published the first of her thirty-nine books and articles entitled, An Atlas of the Medulla and Midbrain. Her other publications include: On the Origin of the Abdominal Lymphatics in Mammals from the Vena Cava and the Renal Veins and Studies on the Maturation of Myeloblasts into Myelocytes and on Amitotic Cell Division in Peripheral Blood in Subacute Myeloblastic Leucemia [sic]. Hardly the kind of work most women were performing at the turn of the century.

In 1938 Florence retired from her brilliant career in medical research to return to her native Colorado to live with her sister Mary. The two sisters lived together quietly in their retirement until 1944, when Governor John Vivian asked Florence if she would be willing to chair a newly established subcommittee on health as part of a planning commission to facilitate the return of thousands of Colorado soldiers.

Florence accepted the offer and immediately began to investigate Colorado’s sanitary problems and health concerns. Two years later, at the age of seventy-five, Florence addressed a meeting of forty-nine civic leaders, informing them of the radical reforms that Colorado must undertake to reduce its unusually high rates of diphtheria, bubonic plague, and typhoid. She went on to outline an ambitious program that revolutionized the health system of Colorado. She then fought tirelessly to ensure adequate funding for her plan.

A statue of Florence Sabin is now one of two from Colorado in the Statuary Hall of the Capitol Rotunda in Washington, D.C. Florence was truly one of the great woman scientists in American history. Many of her dreams and ambitions were spawned right here in Saxtons River at Vermont Academy. And so it is with great pride that we endow the Florence R. Sabin Class of 1889 Distinguished Alumni Award in her honor.